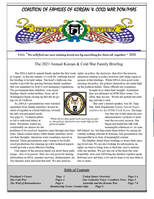 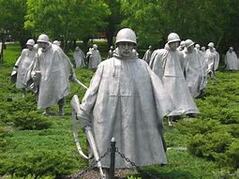 This year, Donna Knox (father is MIA) memorialized a tree in the Coalition’s name. Photos of missing men were hung among the decorations … representative of all the men. A POW/MIA flag served at the top. This was a holiday way to broaden awareness of the accounting mission … while honor all the missing.

​All the best, as always … especially so over the holidays!

On National POW/MIA Recognition Day (Sept 18 ), prisoners of war and those still missing in action were honored in ceremonies across the country … literally …  from the Pentagon in Washington, DC, to Boring, Oregon, to Honolulu, Hawaii.
​
The Coalition was represented by family members at two of the events. Robin Davitt (Cpl. William Douglas, uncle, POW/MIA North Korea) attended the Pentagon Ceremony and Sharyn Selby (Lt. Leland Richey, father, MIA North Korea) was roadside in Boring, Oregon, as U.S. Highway 26 was officially designated “POW/MIA Memorial Highway”!

Sunny Lee, a heartfelt, remarkably active woman connecting U.S. Korean War veterans/MIA Families and the appreciative people of South Korea, has passed. This tribute was put together by Jorja Reyburn and Mike Badzioch … two family members whose lives Sunny touched deeply. Sunny will be missed by so many.
Sunny Lee Tribute

Forgotten Men of the Forgotten War
​will present the mysteries of men still missing from the Korean War, chronicle the long-term impact these stories have had on the men’s families, and then pursue their final chapter in order to achieve some definition of closure.