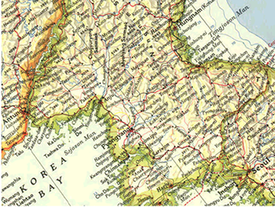 The Korean War began as a conflict between the Democratic People’s Republic of Korea (DPRK)/North Korea and the Republic of Korea (ROK)/South Korea. The United Nations/U.S. soon intervened on the side of the ROK. The People's Republic of China (PRC/volunteer army) and the former Soviet Union (USSR/unofficial) intervened on the side of the DPRK. The fighting stopped three years later with an armistice. A two and one half mile wide Demilitarized Zone was left as a buffer between the two Koreas. To date, the conflict has not been resolved through treaty.

​     Once the shooting stopped, more than 8,000 Americans were among the missing in action. Many of these men were believed to have died; buried by the opposition beneath overrun battlefields or in prisoner-of-war camp graveyards. Airmen perished in isolated losses and likely buried in village cemeteries across North Korean. Nearly a thousand sets of recovered U.S. remains were unidentifiable and later buried as Unknowns in the National Memorial Cemetery of the Pacific (Punchbowl/Hawaii). Too many men were simply missing – soldiers who began a battle then were never seen again or airmen whose planes took off on missions then never returned.

Congressional hearings were convened demanding more of the U.S. government, which, along with the media and the families, demanded answers from China, the Soviet Union, and North Korea to the missing men’s fate. Our enemies remained our enemies, however, and denied any knowledge of missing Americans. The Iron Curtain proved to be formidable; the cold shoulder of the Cold War only produced blanket denials. Ultimately, the missing men, alive or not, were written off by their nation as casualties of war. Their families were left to reconcile a loved one’s official death with an ever-present hope that he might walk through the front door any day.

During the decades that followed, sighting reports placed unnamed American prisoners inside all three Communist countries. Demand for information and short-lived press coverage flared up but blanket denials and lack of access to these nations quieted each storm. No one knows the course the men's lives took.

The end of the Cold War brought a change within the POW/MIA accounting mission. Once the Berlin Wall came down, the Iron Curtain became more transparent. Russia’s President Yeltsin stated that American prisoners-of-war had been taken to the now former Soviet Union. Families of the Korean and Cold War missing men organized and called upon the government’s long-standing promise to resolve the fate of their missing loved ones.

The U.S. Congress ordered the Department of Defense to form a POW/MIA accounting agency and appropriated funds dedicated to the mission. Comprehensive lists of the Korean War and Cold War missing men was compiled. The official status of many of these men was changed from killed in action (KIA) to missing-in-action (MIA) or prisoner-of-war (POW). Agreements were made with foreign nations that allowed new access to their wartime archives, including a U.S./Russia Joint Commission on POWs from both nations. Remains recovery operations and oral history projects began in countries around the world, including joint operations between the U.S. and the DPRK (North Kore). Advancements in DNA technology, and other sciences, made it possible to identify remains that had long rested in anonymity. Genealogy experts located disconnected family members. America's accounting effort became unparalleled throughout the world.

Roadblocks and the Current Overview

Political realities once again overwhelmed the ground swell of humanitarian efforts. In response to the DPRK’s nuclear weapons development, the U.S. pulled out of the successful joint remains recovery operations inside North Korea. Both Russia and the U.S. used retribution for their political differences on the USRJC . China admitted it was not allowing  access to its war time POW camp and U.S. air loss records. While North Korea has engaged in several unilateral remains returns, efforts to renew joint recovery operations and allow search teams access to air loss sites have come to a virtual standstill.
On the positive side, U.S. Korean War Unknowns are being disinterred from Hawaii’s National Memorial Cemetery of the Pacific (Punchbowl). South Kore has begun venturing into the DMZ to recover remains representing all nations participating in the war.

However, most answers lay beneath North Korean soil and hidden in still classified records, including U.S. archives. The Korean War POW/MIA mission is characterized by many such issues, often pressured by unrelated political entanglements between the many countries involved. There is a lot to do.
​The promise to bring home our missing servicemen is made to today’s soldiers and their families, just as it was made to those who served in past wars. If this promise is to hold credibility for the nation’s present-day servicemen and women, it must be honored to completion for those who have gone before.​